And Jesus came and spoke to them, saying, “All authority has been given to Me in heaven and on earth. Go therefore and make disciples of all the nations, baptizing them in the name of the Father and of the Son and of the Holy Spirit, teaching them to observe all things that I have commanded you; and lo, I am with you always, even to the end of the age.” Amen.

St. Thomas was one of the disciples who were with Jesus Christ when the above commission was given to them by the Lord. Thus being sent as an apostle, Thomas set out to India. According to Indian tradition he reached the Malabar Coast at Craganoor (Kodungalloor) in the year 52 A.D.

There is a view held by a section of the St. Thomas Christians in Kerala that the disciple Thomas may have set out to India in search of the ‘lost sheep’ who belonged to the diaspora (cf. Mt. 10:6). Perhaps failing to get acceptance among the Jews in Cochin, St. Thomas may have ‘shaken off the dust of his feet’ (cf. Mt. 10:14) and turned to the gentiles in the interior. According to the St. Thomas tradition the Namboodiri Brahmins were attracted to the new teaching and several of them received baptism. A few families among them were chosen to be responsible for the government of the new Christian community. Mar Thoma then continued his mission and reached the east coast of India and at Madras [now known as Chennai] he was pierced to death by a fanatic Hindu. He, like his master, sacrificed his life yielding to the Father’s will (Mt. 10:24-25). 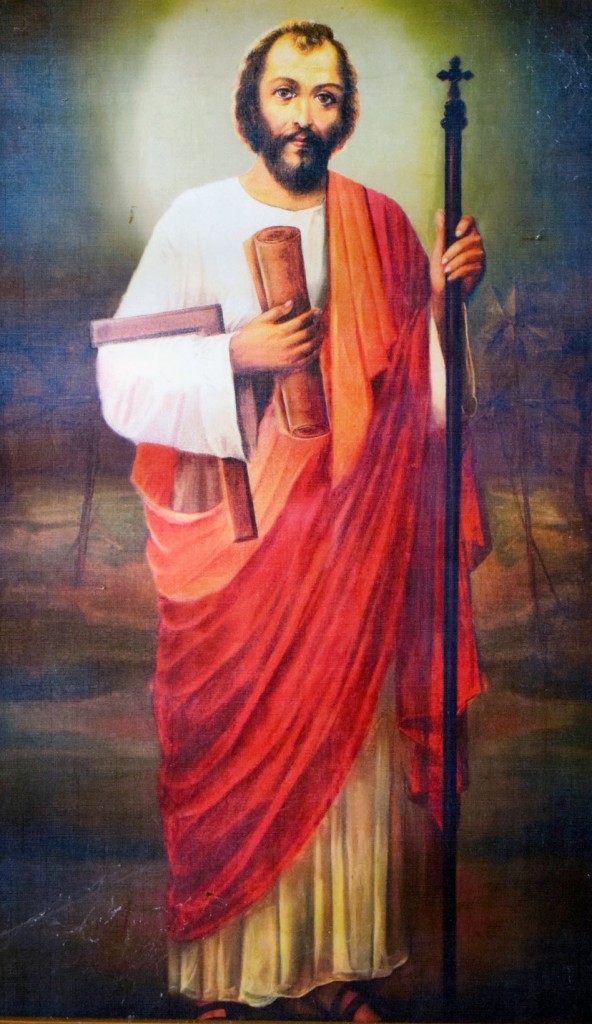 The seven congregations which St. Thomas founded in the Chera Kingdom (Kerala) began to grow very slowly. They made an impact around their surroundings. The neighbours of these Christians called them Nazarenes.

Very little is known about the detailed history of this early period of the Church except the reference by Eusebius on Pantaenus’ visit to India. “Pantaenus was one of these, and is said to have gone to India. It is reported that among persons there who knew of Christ, he found the Gospel according to Matthew, which had anticipated his own arrival”.

In 345 A.D. a significant group, about 400 families, from East Syria migrated to Kerala under Cana Thoma. The Nazarenes received the newly arrived Christians who later settled in the land, and intermingled with the local Christians. These Christians absorbed the local culture in which history seems to have been of no significance. We have therefore very little resources at our disposal to know their life and witness during the following centuries. However, it is known that following Cana Thoma, several priests and prelates visited Kerala from Persia.

In the 6th century the Persian influence began to make a big thrust through a great missionary movement. This was from the Nestorian Church. The Mar Thoma Christians were drawn to this new movement and soon Nestorianism began to flourish in the church. The Nestorian liturgy in Aramaic and their practices were accepted. That continued to prevail among the St. Thomas Christians till the 15th century.

Vasco de Gama discovered a sea route to India in 1498 and he landed at Calicut (Kozhikodu) on the Malabar coast. Being a devout Roman Catholic, he got the Latinising Roman Catholic missionaries to work among the Mar Thoma Syrians. By 1599 the Mar Thoma Syrians, who were by now Nestorians, were asked to recant Nestorianism and embrace the Latin version of Roman Catholicism. This was done at the Diamper Synod (Udayamperoor, near Ernakulam) in which Arch Deacon Geevarghese of the Syrian Christians was forced to sign a document prepared by Alexes de Menezes, the Roman Catholic Arch Bishop of Goa. A very insignificant minority withdrew from signing the document and followed the Nestorian practice. Later they revived and now continue as the Church of the East (Chaldean Church) with their ancient Nestorian liturgy at Trichur in Kerala.

Offended and agonised under the Portuguese led Catholicism, Arch Deacon Thomas mustered his people against Rome and the Portuguese. In 1653, 25000 Christians and 633 clergy marched to Cochin Fort. Confronted by the Portuguese canons, they withdrew to the Church at Mattancherry and took the following pledge: “We and our children shall never be under Rome”. This is the Coonen Cross oath, a declaration of independence against foreign aggression over the sovereign right of the Christians of India. Arch Deacon Thomas was made a bishop with the title Mar Thoma by his supporters, the first Indian Metran of the church. He sought the support of sister churches in Antioch, Babylon, Jerusalem, Alexandria and Abyssinia.

As a response to the appeal sent, Mar Gregorios arrived from Jerusalem in 1665. He re-consecrated Mar Thoma ?. Mar Gregorios belonged to that section of the Antiochian church known as Jacobites. In the course of time the independent church of the Mar Thoma Christians, with their Mar Thoma Metrans was brought under the influence of the Antiochian Jacobite church. The church which declared freedom from Rome, was gradually brought under the yoke of Jacobitism.

During the early 19th century, in 1806, a visitor from the Church of England came to India. He was Claudius Buchanan, a Chaplain attached to the British army in Calcutta. He met the then Metropolitan, Mar Dionysius the Great. He got the Gospels translated into Malayalam in 1811. In 1813 a seminary for the education of the Syrian Christian clergy was founded at Kottayam. In 1816 the Anglican trio, Bailey, Norton, and Fenn, arrived as a mission of help, not to build a new church but to rebuild the old dilapidated church.

Abraham Malpan was one of the professors at the Seminary. The study and learning of the open Word of God combined with saintly life persuaded Abraham Malpan to question some of the practices continued in the Church. He realised that the Mavelikara Synod (January 18, 1836) was not heeding to any kind of reform in the church. On the other hand that the Synod openly and irrevocably declared that the Malankara Church belonged to the Jacobite Patriarch of Antioch and was thus obliged to continue its faith and practice. Malpan along with eleven clergymen submitted a memorandum consisting of 24 theses to Col. Fraser, the British Resident. The memorandum clearly stated the ecclesial irregularities committed by the Metropolitan Chepat Mar Dionysius and his associates and also the wrong religious practices carried on in the church. Col. Fraser was not able to enquire in these matters. Abraham Malpan, Kaithayil Geevarghese Malpan and others were not discouraged. They took upon themselves the God-given task of reformation in the Malankara Church.

The Faith and Practice of the Mar Thoma Church is based on Biblical teachings. The church does not hold any faith which has no clear Biblical warrant. At the same time it does not have a condemnatory or holier-than-thou attitude to other churches that have different practices. Certain practices which were misused and corrupted were discarded (Prayers for the Dead, Prayers to the Saints).

Until the 4th century A.D. five ancient Metropolises dominated the Christian World: Jerusalem, Antioch, Alexandria, Constantinople and Rome. The first four led the Armenian, Syrian, Alexandrian (Coptic and Abyssinian) and Greek churches respectively, and the last the Roman Church. In the 11th century, these churches were divided into two blocks, the Eastern and the Western. The first four remained in the East, while the last one in the West as the single largest church.

The 16th-century reformation led by Martin Luther shook the Roman Church. Protestantism came into existence. Protestantism led to further divisions in the Western Church and the result is the various Protestant denominations like the Lutherans, Anglicans, Methodists, Presbyterians, Pentecostalists, etc.

In the 17th and the 18th centuries the St. Thomas Christians remained in fellowship with the Syrian Church of Antioch. As a result of the Anglican mission, the Malankara Syrian Church was helped to discover her own identity in the light of the open Word of God. For this, the church is grateful to the ‘Mission of Help’ from the Church of England. However, the church retained the essential characteristics of its oriental heritage in worship, autonomy and independence. It added to it a missionary zeal.

So the Mar Thoma Syrian Church is neither a Protestant church of the western type nor an orthodox church of the eastern type. It is oriental in worship, autonomous in administration and missionary in action. The church follows an orthodox (true worship) liturgy and a catholic (to all, for all) mission and evangelism. Truly it is a bridge-church between the eastern and western ecclesial traditions. Being catholic in mission, the church opens its doors to the east and to the west. The church affirms its faith in one, holy, catholic and apostolic church. It accepts the first three ecumenical councils as authoritative, viz. Nicaea (325 A.D.), Constantinople (381 A.D.) and Ephesus (431 A.D.). In the modern ecumenical movement, the Mar Thoma Syrian Church plays a significant role, as a church with oriental heritage and occidental zeal for mission.

Source: The Faith and Practice of the Mar Thoma Church, by Rev. Dr. K.V. Mathew